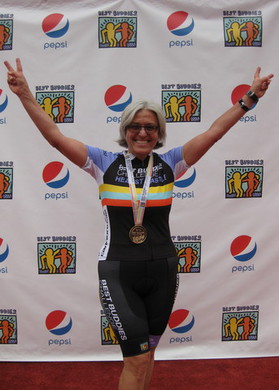 Follow my latest cycling adventures and miscellaneous musings in my blog.

The Best Buddies ride in 2021 was a more modest Challenge (100km), but we're hopeful that we will once again pedal down the coast to Hearst Castle in 2022!

In the summer of 1996, I left my native New Jersey behind, moving to sunny California, where I had a downhill adventure on a pair of inline skates and finally experienced my first earthquake.

From 1990-2013, I was a volunteer with Learning Ally (formerly known as Recording for the Blind and Dyslexic), where I recorded technical material from books in computer science, psychology, and related fields.

Past Projects and Affiliations

At Transmeta, I created the Transmeta Lab for Compatibility (TLC), the Quality Assurance organization that ensured that the Crusoe™ microprocessor would run any device or piece of x86 software you might feed it.

Before that, I managed the Computing Facilities for the Dept. of Computer Science at Princeton University.

Improbably enough, my Erdős number is 4. You might enjoy Paul Hoffman's book The Man Who Loved Only Numbers: The Story of Paul Erdős and the Search for Mathematical Truth.

My bibliography in the Computer Science Bibliography Collection is pretty complete. 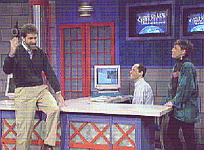 On April 27, 1994 I did a "tour" of the Internet on live television as part of a six-hour science marathon, Live from AT&T Bell Labs! (What was I thinking?!) The Indy workstation's window manager had a nasty habit of crashing when the color map filled up, as it did ten minutes before we went on the air. Luckily, we got through our segment unscathed. At the same time, I broadcast the entire show over the Internet to a world-wide MBone (Multi-cast Backbone) audience, much to the fascination of the professional TV crew.

How many of my early favorite Web sites, collected mostly during the summer of 1994, are still around?

On Saturday, April 8, 1995 I gave two presentations on “Cruising the Information Superhighway” in the Murray Hill, NJ auditorium, as part of the AT&T Bell Labs World of Science Seminar series. The World of Science series ran from 1984 through 2001, with lectures that were open to the general public, geared toward high school students and teachers.

My tour on the lecture circuit included Kauai in January, Manila in April, Memphis in May, Caracas in November, and many places in between. Here are some blurbs about the talks I delivered in Washington, DC and Wilmington, Delaware.

In 2000, I completed a two-year term on the Board of Directors of the USENIX Association.

In 1994, I completed a two-year term on SAGE's first elected board of directors. SAGE (the System Administrators' Guild, now known as LISA) was the first special technical group sponsored by the USENIX Association.